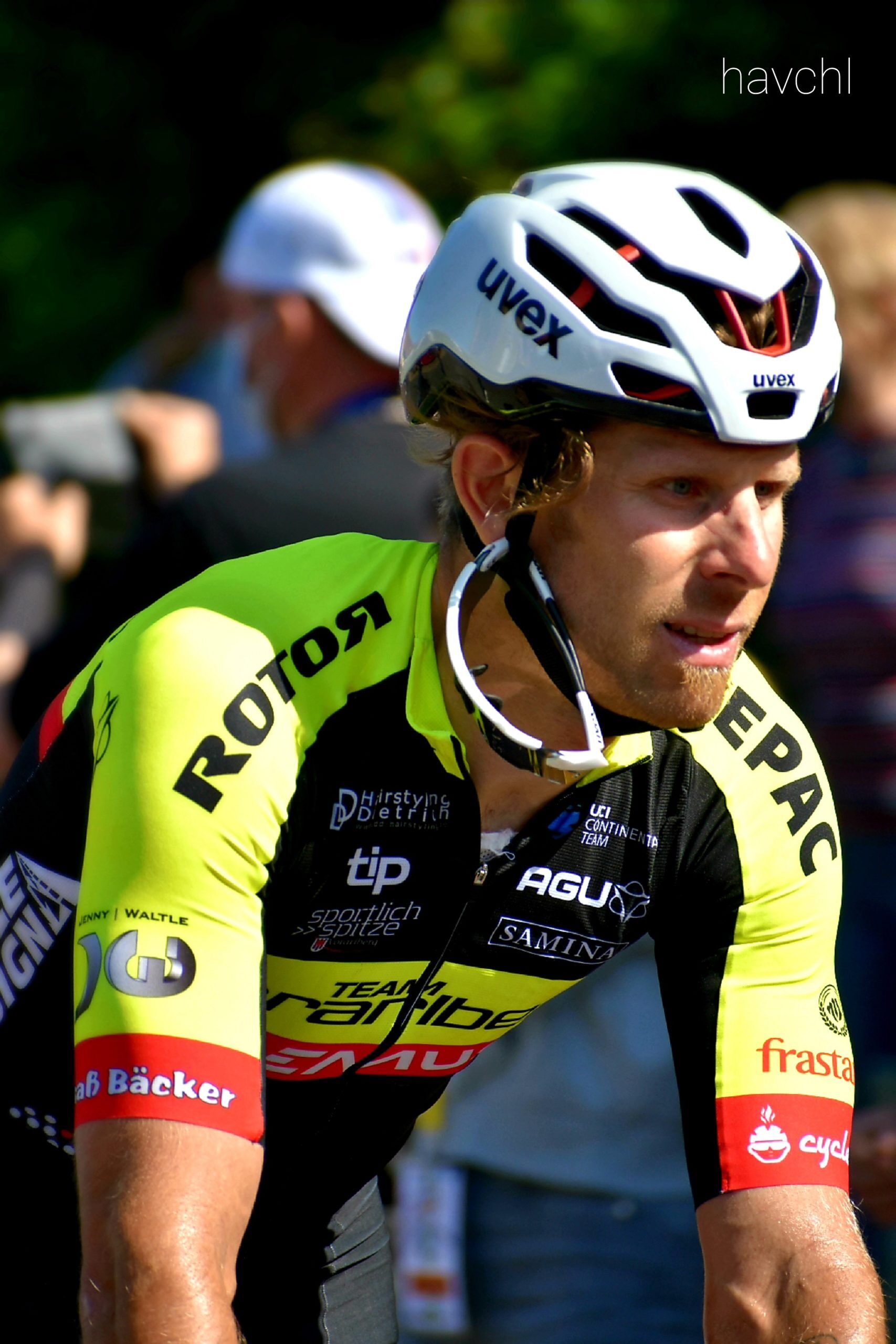 In the overall ranking Roland Thalmann is sixth, only 16 seconds behind the winner Idar Andersen (NOR/Uno-X) and can travel to the Tour de Suisse well prepared.

Before that, the GP des Kantons Aargau UCI 1.1, a top-class one-day race (3 June), is on the agenda. Team Vorarlberg will be at its best against numerous World Tour teams.

The young delegation showed a strong performance today at the 170 kilometre race in Slovenia. In the technically demanding final, Meiler sprinted to tenth place and also added the first UCI points in 2021 to his account. Numerous crashes also overshadowed this race. However, all Team Vorarlberg riders who had to go down today got off lightly.

Attention, ready, go…. and away was Colin Stüssi today on the stage over 158 kilometers from Pont a Mousson to Lesmenils! His attack at the beginning of the race allowed him to take the day’s leading group with two competitors (Vojtech Repa / Equipo Pharma and Louis Coqueret / Leopard). He showed his class on the mountain classifications, thus securing the mountain jersey after the first stage.

Adria Moreno has to bury his ambitions in the overall classification due to a crash that was not his fault. Alexis Guerin loses a few seconds to winner Rory Townsend from Ireland (Team Canyon), but only due to the fact that he is still acting with some respect after his serious crash in the spring in the field. Thalmann crosses the finish line with the leaders.

The queen stage tomorrow over 177 kilometers and 4000 meters of altitude will be a different story for Guerin, Thalmann and Moreno. Here they want to annoy the overall leader of the Norwegian Pro Continental Team Uno-X Idar Andersen a little.

Today’s opening with the win of the mountain jersey by Colin Stüssi now makes you want more! Good luck guys!

Team Vorarlberg wants to fight for top places in the overall classement!

Today’s prologue start over 3100 meters was a real “warm up” for the start of this four-day tour in the Mirabell region. Filippo Fortin classified around 25th place on the very angular, dangerous course, but he has his sights set on tomorrow.

The other teammates around the captains Thalmann and Guerin, classify themselves as expected in the midfield of this first section. Tomorrow could be an affair for sprinters, before almost 4000 meters of altitude await on Saturday in the fight for the overall classification. And that is then quite to the taste for the Vorarlberg Cracks.

After the great performance at the Mercantour Classic last Monday in the mountains of Nice, Guerin, Thalmann and Co. want to take this momentum to the Tour de Mirabell. The four-day tour starts tomorrow Wednesday evening with a three-kilometer prologue. Filippo Fortin is already hot here.

Roland Thalmann has been called up to the Swiss national team for the Tour de Suisse (mid-June). Like Guerin and Moreno, he wants to show his good form in France. The squad is completed with Colin Stüssi and Johannes Schinnagel.

Rain and cold, plus a course profile with 4000 meters of altitude in the hinterland of Nice. This was again an incentive for a brilliant performance, because the competition was top positioned with four World Tour and seven Pro Continental teams – and all had the same weather!

Together with his long-time ex-team colleague Davide Orrico (Vini-Zabu) Lukas Meiler occupies the leading group. This is swallowed in pouring rain in the second half of the race again, but Guerin u. Co were protected by it.

Then follows the “Thalmann – Show”. 50 kilometers before the finish, the team captain, who suffered a metacarpal fracture in his right hand last week, launched an attack from the 20-man leading group around Guillaume Martin (Cofidis), the overall 11th in the 2020 Tour de France. The Eurosport commentators were beside themselves with excitement about this riding style and courage. Thalmann was dropped again before the 12-kilometer final climb up the Col de Valberg, but was able to keep up the pace for the time being.

“All in” is now the name of the game up to 1670 meters. Guillaume Martin (FRA/Cofidis) lives up to his role as favorite and wins solo ahead of his compatriots Paret (AG2R) and Armirail (Groupama FDJ). Behind Mathias Frank (AG2R) Adria Moreno Sala becomes a great sixth. Only a few seconds later the next Team Vorarlberg rider follows with Roland Thalmann in eighth place. Alexis Guerin completes with rank 14 on the one hand a super comeback after his long injury break, on the other hand a sensational team performance. The reward 75 UCI points and by far the strongest Continental team: Chapeau – that was really strong today!

Alexis Guerin give his comeback at the first edition of the Mercan Tour Classic Alpes-Maritimes UCI 1.1!

At this climb race with about 4000 meters of altitude, the cracks of Team Vorarlberg are challenged for the first time this year on mountainous terrain. And this immediately of the harder variety. On the one hand the weather is supposed to be rainy and cold, on the other hand the competition is huge.

Thomas Kofler – Team Manager: “To be part of the first edition of such a race in France is an honor. Especially after these hard months in which things didn’t go very well. We are happy that Alexis Guerin is back in the saddle and will try to prepare the team for this hard day together with Roland Thalmann. We can’t expect too much, as many big pros from the big teams are fighting for Tour de France places. But the guys will give everything!”

The race will be broadcast live on Eurosport Player. There will also be a detailed recap on Eurosport starting at 5:30 p.m.

Finally a real tour again for the men of Team Vorarlberg! After the one-day races and numerous intensive training sessions, the six professionals from Vorarlberg presented themselves wide awake today at the first stage over 120 kilometers of the Tour d`Eure et Loir in France.

The young guard of Team Vorarlberg showed a lot of commitment in the race today – Dominik Amann and Felix Meo were able to score points in the first sprint classification as well as Lukas Meiler in the mountain classification.

After several breakaway attempts, the peloton was closed about 10 kilometres before the finish. So everything was set for the sprint of the day.

Tomorrow follows the second stage over 187 kilometers from Courville-Sur-Eure to Dreux.

Roland Thalmann as Team Vorarlberg soloist at the Mallorca Challenge!

This year’s Mallorca Challenge already started yesterday with the GP Calvia over 168 kilometres. Thalmann with the colours of the Swiss national team on his shoulders finished yesterday’s race with start in Peguera and finish in Plamanova on place 26!

At today’s second stop of the Trofeo Serra da Tramuntana over 158 kilometres from Llostea to Deia Roland Thalmann finished twelfth in a very strong field.

Jumbo-Visma wins at the 10th GP Vorarlberg in Nenzing

Adria Moreno in sixth place in the world-class field!

Such a high-caliber lineup had the entire austrian league in recent years never as a guest. 200 starters from 14 nations have kept what was announced. The selective circuit over almost 18 kilometers in the 162 kilometer (2000 meters of altitude) long race, with the climb up the Rönsberg was the yardstick. Indication for it the record average of 43,3!

Fortin must let tear at the Rönsberg very narrowly!

The leading group with two Team Vorarlberg professionals around Lukas Meiler and Markus Wildauer, determined for a long time the pace in the race. However, they never really let go. In the second last lap the attack of Antoine Debons, the newcomer from Switzerland in Team Vorarlberg (see below). But his attack is also leveled. On the last climb then the full resolution on the mountain. Jumbo-Visma and also Team Vorarlberg tried everything to look for the decision. However, “Vorarlberg” sprinter Filippo Fortin missed by a hair’s breadth the group at the end of the climb. Otherwise, it is quite likely that Team Vorarlberg would have cheered today. What if, but today they were razor-thin!

Tension to the end in the race in cool but dry weather. The 21 year old from Jumbo-Visma Team wins five seconds ahead of Slovenian Matevz Govekar (Tirol Cycling). In third place the next Jumbo rider with Rick Pluimers (NED). Best Team Vorarlberg pro is Adria Moreno Sala in sixth place. Thalmann is 13th. Daniel Ganahl finishes in his second professional race with Fortin in the second group.

Swiss Antoine Debons made his debut!

Last week, the last spot in the squad was filled by 23-year-old mountain-fast Antoine Debons. He has been a pro with the IAM-Excelsior and Akros-Excelsior teams, respectively, for the past two years.

The race was broadcast live by Studio K19 for over four hours and streamed on the Internet. Numerous online platforms from Austria, but also from abroad, picked up the signal and broadcast it as well. Cycling is on everyone’s lips!

Our website processes data for the full range of functions. For this we would like your approval. Learn more